(Dates are based upon the 360 bible prophecy calendar)

(My dream occurs the next morning about the pitiless sentencing and hangings of a Jew and a Gentile and the astronomy book given to me to preach from and the need to warn others of the coming persecution of Jews in Europe by Islam and the refusal of the nations to help. This dream sums up the meaning of the fall of "the king of hell" and of his wrath that follows, and of the judgments to come, and of the Great White Throne Judgment.)

-----10 days later ... Dwarf planet Eris is named and Pluto is again demoted in that it was given a catalogue number as a dwarf planet. Eris would have become the 10th planet if Pluto had remained. (See articles about Eris. Eris is the goddess of lawlessness and sister of Ares, the god of war.) (Sept 13, 2006, Day of Atonement.) Eris was in the constellation of "The dragon," when named (and when discovered). (Compare this to the dragon of Rev. 12 who casts 1/3 of the stars to ground with his tail, etc. Planets were known as stars to the ancients. Ironically, Eris was formerly known as UB313, discovered Oct. 31, 2003 on Halloween in the constellation of the Dragon, which was during those record-shattering huge solar flares!) (as 1251 BC) (There was talk of there being 12 planets, however in the end only 8 remained, meaning that "one-third" fell. See Rev. 12. All the planets are named after Greek and Roman gods.)

Passover-Tabernacle Blood-Moon Tetrads
and the Menorah of Time 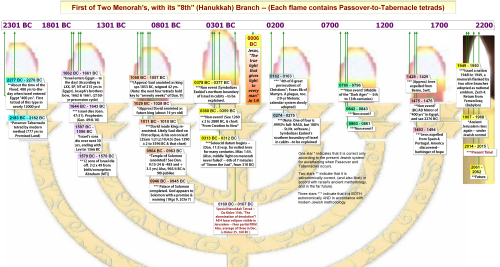 All Passover/Tabernacles tetrads, including distant future. Click to enlarge.

Pope Benedict XVI: Why was he elected on Triumphal Entry?