The Death of the Pope John Paul 2

Please note:
This does not mean that we are now in the Great Tribulation period,
but we seek to show that all thing are on His calendar.

As the regular readers know, we have been charting the significant international events happening 1150, 1240, 1260, 1290, and now 1299/1300 days from when the Twin Towers fell---all biblical numbers and expressions of a 3½-year period---the number associated with the great tribulation period in bible prophecy. As a matter of fact, just earlier today (April 2, 2005) I put out the article on the 1290 days. (The 1150 is from when the Pope's friend, Yasser Arafat died.)

The Towers fell 9 am on Sept 11, 2001, which was Elul 23 in New York and Rome. The Pope died 9:37 pm Rome time, April 2, 2005, which was 2Adar 23 on the Jewish calendar in Rome (since it was after evening there, and hence a new day), but still 2Adar 22 in New York. This is significant because there were two possible days that the Pope could have died on in order to mark this 3½-year period on the Jewish calendar---they were 2Adar 22 and 2Adar 23. Amazingly, the the Pope died on them both!

On the 360 calendar, the Pope died Abib (Nisan) 21 in New York, but Abib 22 in Rome. (Or plus one month---the 360 calendar has two leap-month methodologies.) The Pope therefore died at the end of the 7 days of Passover (unleavened bread) according the the bible prophecy calendar. (Note the "7 days" again.)

It happens that 1150 x 3 years (Daniel, and recall Arafat) before his death they celebrated the first feast of unleavened bread when Israel came out of Egypt---and 1260 x 2 years before his death Israel celebrated this same feast "seven days" having completed Zerubabbel's temple after they came out of Persia (Babylonian captivity), (Ezra 6:22)! (Further details.) The Twin Towers fell 1260 x 2 years from when they began to rebuild the temple, and, as said, the Pope died 3.5 years later. (Click here for a closer look at this, as put on the net 3.5 years ago.) The Passover and the temple are closely aligned in meaning. The seven days signifies the end of the Age (as does Tabernacles).

At the end of the Age the Lion of the tribe of Judah will retake His staff and rule His sheep Himself---He is the Passover Lamb and will lead His people out of bondage---religious and political. But all imposters will be cut off. Ponder the Picture Bible Code which is found in the passage of Genesis 49 about 'the scepter not departing from the lion of Judah until Shiloh comes.' (Shiloh means, "The one to whom it [the staff] rightfully belongs," Genesis 49:10; Ezek. 21:27.) To be elaborated on later. 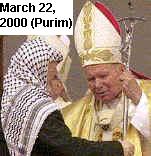 The staff in the bible-code picture reads: "The scepters of Edom/Moab are among them." (Or, "The scepters of a man are among them.") The sun disk at top of the cross (and upside down sword) reads, 2x , "His star," and the top beam reads 2x, "When the star appeared." These key words are taken from Genesis 49:8-10, Num. 24:8-19 ---as fulfilled in the birth of Christ, (Matthew 2). In Matt. 2, the star of Bethlehem that the magi followed was called, "His star," and 2x the "star appeared." Herod tried to find out "when the star appeared." These are all the key words of the text and of Genesis 49 and the prophecy of Num. 24. The rest will be elaborated on later, but essentially the 'Lion' reads, "Judah" 5x, and also reads "Levi is His son" as well, bringing out the fact that Jesus is both king and priest! The tail reads, "I AM the Lion of God." The head reads twice, "The scepter/staff." The lion stands for Christ, but negatively also for the "beast" and "false prophet" who seek to wrestle the staff from His hands. But "he will slay them with the rod of His mouth," (Revelation 19). Thus, Edom and Moab are a portrait of what is to come.

Note the heavenly sign in the constellation of "the manger" (Praespe) with the comets tail through the Lion (Leo) in May of 2004, as foretold in the acrostic bible code. And note the pope in the manger, too, on his famous visit there in 2000, "sitting where he aught not." (See preview of comet images here.) (Further details.) 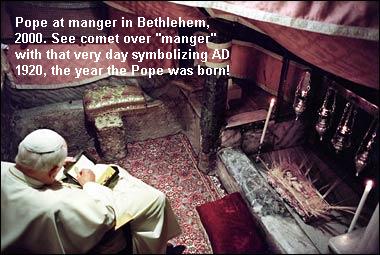 But how is the Pope connected
to the fall of the Twin Towers?

Next, see audio/visual of
"The record 12 comets in 2004
and their disturbing prophecy,"
as explained by two picture bible codes.

Pope Benedict XVI
Why was he elected on Triumphal Entry?

The link between the two Indonesian quakes/tsunamis
of Dec 26, 2004 and

and the Balance Bible Code