Why I Took the Bible Codes Off Ten Days

A Candid Appeal for Patience and Prayer

Another warning or the real thing?

"O Jehovah, thou hast persuaded me, and I was persuaded; thou art stronger than I, and hast prevailed: I am become a laughing-stock all the day, every one mocketh me. For as often as I speak, I cry out; I cry, Violence and destruction! because the word of Jehovah is made a reproach unto me, and a derision, all the day. And if I say, I will not make mention of him, nor speak any more in his name, then there is in my heart as it were a burning fire shut up in my bones, and I am weary with forbearing, and I cannot contain." (Jer. 20:7-9)

(We will look at the SARS Bible Code last.)

Friends, I am a nobody: In the natural, I am very weak in both languages and mathematics. However, the Spirit of God works mightily in me in both of these so that the glory is His. His purpose is to confound the "astrologers of Babylon" who by their secrets arts and natural intellect would attempt to dethrone God and enthrone themselves as gods. (For there is not one aspect of all the bible that the devil has not counterfeited.) But by using the weakest of vessels to overthrow the mighty, He is thereby glorified. God has determined to confound the wise and mighty---both seen and unseen---in order to reclaim that glory which is His alone; by making fools of diviners, and exalting the Creator---the Lord Jesus Christ.

At times I am intimidated by this mighty throng of astrologers that number in the millions, and who come from every religion under the sun---from Kabalistic Judaism to Hinduism, with their "divine cycles of time."

At times, I grow weak when I fail to pray as I aught, and the realities of my calling fade, then my hands grow limp and I muse, "What if by some slight chance I am leading God's people into astrology rather than confounding it to God's glory?" Just the remote fear of such triggered me to remove the whole web site!

Friends, you that know God, the battle is lost unless you pray for me! I cannot as much as retain what I have received---let alone go forward---unless you pray for me. This is a spiritual battle! This is not a natural one. I have grown weary, I admit. I am shut up on every side!

There are things that I have seen in the bible numbers and codes (all that exalt the Lord Jesus Christ) that far surpass anything that I have revealed on the Net so far. God makes mincemeat of astrologers! 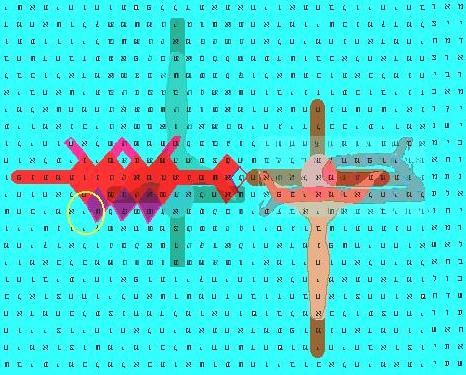 (Note: The image on right was added two years after this article was written.)

Six months ago I discovered picture-bible-code after picture-bible-code that linked together somewhat like a still-frame movie using the biblical sequence of 430 letters, (Ezek. 4). (This was immediately after receiving a mighty revelation on the very same 430's sequence in the bible numbers, which I have almost completed writing. It stands by itself apart from the codes. I did not set out to discover these particular set of picture-bible-codes according to this 430-pattern, nor could I have even if I tried.)

For instance, a picture-bible-code of two trees in the garden of Eden (i.e., the tree of life with an angel with a flashing sword, and that of the tree of the knowledge of good and evil); and with a fierce dragon/snake in-between. The dragon is about to devour the Lamb of God, (Revelation 12). The blood of the Lamb goes into the earth---into the river of life---into the deep places of the earth. (This entire picture-bible code is embedded at the biblical account of the serpent in the garden of Eden in the book of Genesis.) All this forms one massive encoded picture that is warning of another terrible holocaust coming upon the Jews. (Who can bear such things! If God wills, and He gives me courage, I will put out this one later.) This, in turn, is connected to the picture of the menorah with a serpent, and the Mount Sinai picture bible code, (as shown on this site). As said, the pictures are in low multiples of 430-letters apart.

Then, there is a second menorah and serpent (also at 120-skip sequences), 430 x 3 letters later (= 1290 letters, cf., Daniel 12; Ezek. 4). It is so arranged that the Angel with the flashing sword (at the tree of life) is projected ahead by the 430's so that His foot literally overlaps, and is thus upon, the head of the serpent. (The serpent is beside the Menorah and Burning Bush picture-codes. This picture-bible-code is found embedded within the burning-bush text in the book of Exodus. The picture-code is so arranged that the burning bush and the Menorah are overlapped as one. A series of declarations from God, who is, "I am that I am," forms the menorah.)

Beside this, there is a picture-code of Moses casting down his rod that changes into a snake. (It is found embedded at the text to do with the same.) All this is numerically perfect in every way to the point that the numeric is more amazing than the actual picture codes!

The Lamb that was slain  appears again (430 x 2 or 3 letters earlier, as I recall), as One that is resurrected and ruling and opening the scroll of Revelation 4-5, (Also at an ELS of 120.) Then there is another picture of Moses fleeing from His rod when it changed into a snake. (At that time, God told him to reach out and take it by the tail so that it might change back into a rod.)

There is more, but this is all that I remember right now. I got scared and burned about 3000 pages of work shortly thereafter. Only God knows the great strain I was under. I tried to run from God, but it was no use! God was patient with me. I fasted and prayed---as did my wife, but always the same answer: "Do not fear men, or else I will make you ashamed before them! (Jer. 1:17). "And do not lean to your own understanding, for my word will accomplish all that I send it to do."