The Timing of the Rapture of the Church

I personally am convinced that the Lord has made this point unclear so that we are kept in a state of readiness rather than debate. I also believe that when the event occurs that it will be timed in such a way that all three will be correct depending on ones perspective. This is because there will be overlapping seven-year periods so that what is the beginning of one seven will be the end or middle of another. Note that the seven-years takes its cue from the "seventy-sevens" of Daniel 9. Hence, there is a seven before the seventieth. Moreover, it can be shown that they are each divided up in half as well. Also note the two seven-year periods of Joseph's plenty/famine years.

Interestingly, from the famine when Israel went into Egypt unto the fall of Judah and Jerusalem (586 BC) when they went back into Exile are 1290 years (if that were in days, this would be a 3.5-year period --- i.e., half-seven). And plus another 1290 + 1290 years takes us into the present. Thus, when we look at the ages there is a sense in which we are at the beginning, middle, or end of a seven-year span. I discuss this more fully in my numbers website.
http://www.1260-1290-days-bible-prophecy.org/index.htm

Following article inserted much later, written on May 8, 2011

There are billboards all over the country predicting that Jesus will return on May 21, 2011?

Back in January, I predicted "terrible tornadoes and (forest) fires" for April 14-22 (2011), or "especially" May 14-22 (and perhaps even on June 14-21). So far the first of the three possible months has come true, and sadly, even more than I predicted! Thus, April may be the fulfillment of this prediction in full, or, as said, God may repeat this pattern again in May 14-22.

Back in January, I was considering doing a Youtube video about this prediction of the tornadoes, but decided not to because back then I came across this man predicting the Lord's return that happened to land on one of the same dates that I was predicting these terrible tornadoes! I did not want to be associated with false prophecy. Instead, I simply recorded the the predictions on my website. But since that time, gullible people have been giving money to promote this error.

Ironically, this man bases his prediction by calculating that Jesus would return '850 times 850 days' (722500) from Jesus' death on Nisan 14, (April 1), AD 33. Ironically, the predictions I am making for this same week of May 15-22, 2011, are partly based upon the fact that this is 1260 + 1260 days back to when God revealed to me the Balance Bible Code image. Well, it happens that from Nisan 1-7, AD 33 (the first week of the New Year of his death with one more week until his death), plus 720,000 days equals the same week exactly of the Balance Bible Code, which dates I have written about dozens of times over the past seven years. (Nisan 1-7th is also the anniversary of the setting up of the tabernacle in the wilderness in 1445 BC, and for this reason some feel it is also the day of Jesus birth 360  x 4 years later, with His circumcision on the 8th day, inclusive.)

Jesus warned us not to predict the date of His Coming, (Matt. 24:36). However, both before and after the time of Jesus, there have always been true prophets who predicted future disasters (Acts 11:28), but any revelation about the timing of Jesus' actual coming was always intentionally veiled in mystery (1Peter 1:1). There always have been and there always will be, patterns upon which God may act to bring about the Lord's return. But these same patterns may simply point to much lesser events, such as the predicted tornadoes. God reveals these things to whom He chooses.

Last year, God made known to me that He was delaying "the end" by 15 years, and that He reserves the right to delay it another 15 years after that, and so on. (See my article on "2012?" God also reserves the right for surprises, including a sudden return before He is expected!) (Update: To clear up misunderstandings about what I am saying about 2025, I have written the following article in response to an email sent May 20, 2011.) 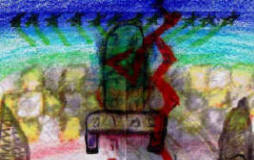 Ironically, early May 21, 2011 happens to be one of those dates that could have been "the rapture" of the believing dead and the living; but as said, God is delaying the end by at last 15 years. This date happens to be the date encoded at the end of the river, which flows from the throne in the Balance/Cherub Bible Code.

"Be calm! Be still before me! I AM Jesus! Forever My name is the Lord! Be calm and you will flow/shine like a river (and a lamp and a rainbow, having been awaked to the colors of my rainbow)!"

Instead of His return ("rapture"), however, God has marked the end of these past seven remarkable years with symbolic signs in rapid succession that do indeed concern His Second Coming, such token signs as the Hanukah-Mount Carmel forest fire, the fall of Egyptian President Mubarak, the great Japan earthquake, the "terrible tornadoes" with subsequent Mississippi river flooding, and the wedding of Prince William, and shortly after that, the death of Osama bin Laden, a type of antichrist. (We discuss these astonishing signs in detail below.)

So, now I am left to wonder if the Lord will purposely do absolutely nothing on the predicted date of May 21, 2011, in order to make a point to His people "not to go beyond what is written". Or, on the other hand, perhaps God will go ahead and allow the "terrible tornadoes and fires" to occur as ordained, repeating the sad events of April?

(See article about how this day, May 21, was significant as a type of the rapture,
but just as a type, a could-have-been.)