Writing on the Wall Bible Code

(Part one of two parts)

How the timing of various events that fulfill the mene-tekel code
were recorded to our first website years before they happened!

(See introduction to this page)

Please see note below this table of links to explain why it is here.

We begin by discussing the 1150 days of Daniel 8 since we have already discussed the other sequence of events and their numerical fulfillment in the links in the above table. You will find the information somewhat scattered throughout the above documents because they were being fulfilled as I wrote them, making it difficult to go back and insert new information properly.

"In the third year of Cyrus king of Persia, a revelation was given to Daniel...Its message was true and it concerned a great war...At that time, I Daniel, mourned for 3 weeks... Then he continued, "Do not be afraid Daniel. Since the first day that you set your mind to gain understanding and to humble yourself before your God, your words were heard, and I have come in response to them. But the prince of the Persian kingdom [that is, a demon power] resisted me 21 days...Now I have come to explain what will happen in the future..." (See Daniel 10:1-14 NIV.) 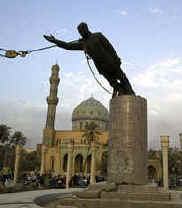 Hence, the "21 days of war" is divided in half as 10.5 days by where the 1150 days terminated in its countdown from when the mene-tekel code began to be revealed to me. (10.5 is 3.5 x 3.) It also happens that the 1150 days, plus 3.5 more days, falls on the religious New Year that Moses inaugurated at the exodus from Egypt, and it was also the Babylonian New Year. (A revelation about the 25800-year cycle of stars was revealed to me on this very New Year's day as well...an insult to the astrologers of ancient Babylon who studied these very things! The Nisan 1st New Year began their great yearly festival, which they also based upon the stars. Thus, this revelation came even as ancient Babylon [Iraq] was being bombed in the natural, and in the spirit, so to speak! For, "the great war" is not merely an earthy one, but as the above passage reveals, it is predominately a spiritual battle.) Hence, the mene-code is following this basic pattern of fulfillment:

[Editorial update: Go here to see how this pattern is now being repeated all over again a second time!)

Compare the following chart (taken from the Internet) with this one above. It was published on the internet 5 or 6 years ago. The 'book,' (which I never completed), providentially is called, "The Writing on the Wall," with the Rembrandt picture of the code at top of each page. This is significant since I never as much as knew that there even was a code within those four words "mene, mene, tekel, uparsin," at the time I received those numeric revelations!!! The exact dates of the various fulfillments of the bible code were revealed back then without my realizing it! Not just the same pattern of 430, 1150, 1260, 1290, and 1335 days/years (and other numbers), but the actual dates that they were to occur! Moreover, the day (today, Oct. 7, 2003) is the day that my eyes have been opened to realize all this, and this date is central to the entire vast schema of these numbers!

Note the 7-years of Joseph's famine: This 7 years is divided in half as 3½-years plus 3½-years when studied in detail. This helps explain why there are plus and/or minus 3½ days on the mene-tekel code prophecy of events as tabled. The code is patterned after the Writing on the Wall book, which is patterned after biblical history. In other words, the mene-code is repeating history again in short order.

The basic similarities between the two charts are obvious. Note the repetition of the 1150, 1260, 1290 and 1335. (The 430, too, is repeated, as discussed some time ago here, as is 360, 390, and 1299. See the 5-part series on the mene-code. For example, from the Twin Tower collapse until the end of the said "1335 days" are 360 + 390 days, which is exactly the 2-year anniversary on the 360 calendar (with the leap month added). This is also the deadline that I gave the Lord to prove to me that the bible codes were real beyond doubt and are in His perfect will. However, when I chose that date, I did not know at the time that the day chosen was 1335 days from when the code first began to come to me! "Blessed is he that waits for and reaches until the 1335th day." This "two years" is part of a complex mirroring pattern going backward in time, so that the two years signifies "a time, times (i.e., 'two years'), and a half a time." This is difficult to explain quickly, but I have studied this phenomena for the past 10 years. For just as the codes can go backward, so can the numbers. And each and every day from the dawn of the Creation represents a consecutive symbolic year of time, which is the key to understanding the revelation. And the opposite is true as well: Each year starting from the Creation (and before) can symbolize a consecutive day of time. This is also true with the codes.

Every letter (or 10 letters) signifies one year or day of time. (This is discussed further here.) Literal days and years, and letter-days and years intersect with one another so that current events are predicted pictorially in the bible long before they occur. (The date of the revealing of the mene-code in Feb. of 2000 was also encoded within the mene-code using the '10-letters equals one symbolic year' principle. The mene code is the 11734th letter of Daniel, and represents 1173 years and 4 months of time. The creation was in the aut. of 4305 BC, this was revealed to me long before I heard of the codes, and is deduced by simply counting back to the maximum Creation point. See the numbers website. Therefore, the mene-code can be symbolically dated using this method to be as 3132 Dec. to 3131 Jan/Feb BC. (Therefore, subtract 1260 years and we come to 1871 BC, the end of Joseph's famine. Less, 1290 x 3 more equals Dec., AD 1999 to Feb. AD 2000, which was the Y2K worldwide party, and when the mene-code came to me. And so on...) (See here for how the exact date of when the Iraq war would start was also encoded in the hand-code. The hand literally pointed to the exact date!) (See the day/year grid and the timing of the exodus.  (See the day/year grid and the timing of the exodus.  Click here for more on "The day equals a consecutive year/date of time" principle.)

And each picture code joins with other picture codes to create increasingly clear pictorial detailed prophecy.

[Editorial update: Go here to see how this pattern is now being repeated all over again a second time!)

Besides this website, here are other sites that elaborate on these things. Each has a piece of the puzzle.