The deaths of Uday and Qusay,
sons of Saddam 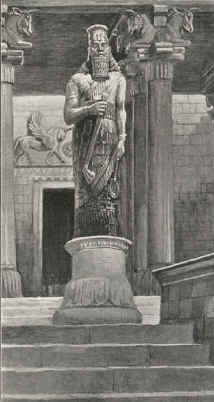 The mene-tekel code primarily speaks of the death of Jesus in contrast to that of Belshazzar, "son of Nebachadnezzar." However, it was again fulfilled symbolically in Saddam when the statue of Saddam was toppled. Saddam fancied himself as another Nebachadnezzar; Iraq is ancient Babylon. As a matter of fact, Saddam recently rebuilt Babylon and even held some council meetings in the very hall where the hand appeared on the wall and wrote those four mysterious words foretelling the death of, Belshazzar, ("son" of Nebachadnezzar). (See the mene-tekel code.)

Even though the mene tekel code is initially about Belshazzar and his execution, nevertheless, I anticipated that Saddam would likewise be slain for the following reasons:

And so, it was logical that I should expect the mene-tekel code to be fulfilled in the death of Saddam and perhaps his sons; (just as Haman and his sons were also slain.) Moreover, the feast of Purim literally means the feast of (casting) "lots," which is full harmony with the mene-tekel code with its emphasis on being "numbered" for disaster. They even used a game of chance (a deck of cards) with Saddam and sons on it to help identify and capture him! Surely, the writing was on the wall for Saddam and sons that day, Purim, 2003!

Despite all this, I had plans to nevertheless remove the bible codes on Sept. 1, 2003 (360 x 2 days after the World Trade Center) if Saddam was still alive, since the code clearly prophesied about Saddam's literal (not just figurative) death, or so I thought. I supposed that the bible codes must meet the rigors of literal fulfillment, and not merely in figurative fulfillment, (as in the image/statue of Saddam falling). The literal fulfillment of the code was necessary for the courage to keep this codes-site on the Net. (As a search through various articles will show, for many years now I have struggled with whether to keep this site up. Though the codes are real, most abuse them, and I did not want to be party to that. Be warned!)

The reason I chose to remove the codes '360 x 2 days' after the Two Towers fell was because I had decided the previous year that I would take them off 360 days from the Twin Towers. I then extended it to 390 days, (which is also a 360-day year, except with a leap month). I was much perplexed, and my wife and I prayed and fasted many days. The codes only narrowly escaped being taken off at that time, though I did burn all my notes, thinking that that would some how help me make up my mind once for all! Nevertheless, at that time I decided to give the codes one more year---and see if they bore any good fruit, then, if not, 'I would cut them down'. (I did end up taking them off anyway for a brief 10 days in March/April, 2003.)

Thus, it seemed logical to test the codes by this request.