What is a Generation in the Bible?

"As the sun was setting, Abram fell into a deep sleep, and a thick and dreadful darkness came over him. Then the Lord said to him, “Know for certain that for four hundred years your descendants will be strangers in a country not their own and that they will be enslaved and mistreated there... In the fourth generation your descendants will come back here... (Gen 15:16)

God said to Abraham that after 400 years He would deliver Israel, "...in the fourth generation". A generation in the Bible is normally 40 years. However, here a generation is 100 years (4 * 100 = 400 years). This is understood by virtue of the fact that Abraham had his promised child when he was exactly 100 years old (Gen. 21:5); it is evident, therefore, that the age of a man when his first child is born is the raw definition of a generation.

Nevertheless, notice that the full number (400 years) is exactly ten-times that of a regular generation of 40 years. Both 100 years and 40 years are a generation in the Bible. However, the average of these two, 70 years, is on occasion also found in the bible, (Psalm 90:10). But "70 years" is a generation according to the average age of a man at his death, rather then when his first child is born (as with the example of Abraham).

As for showing 'why' a generation is primarily 40 years, I relegate the bulk of that discussion to a footnote in that this fact is commonly received already among scholars and based upon numerous scriptures.(2)

Two genealogical records are supplied of the generations that lived during the long stay in Egypt. The first lists four names and perhaps is a partial list. It was given immediately before the plagues of Egypt begin (Ex. 6:13-27, and recurs in 1Chronicles 6:1-3. This list covers Levi to Moses). The second has ten generations of names (1Chronicles 7:20-27. This list covers Ephraim to Joshua's father, "Nun". {Joshua is the 11th name listed here because he represents the generation in the wilderness (40 years) since he leads into the succeeding generation in Canaan land.} Hence, we see that the four generation of names (4 * 100 = 400 years) represents the four generations in Egypt foretold by God. The 10 generation of names represent the same, but as 10 * 40 (400 years) with the following 40 years of desert wanderings accounted to "Joshua". The name "Joshua" is a variant of the name "Yeshua").

To summarize: A generation in the bible is primarily the age of a man when his first male child is born; but secondarily, the age of a man at his death. The bible then rounds the exact span of years in a "generation" to be 40 and 100 years as the primary usage, but on occasion, "70 years". And 70 is the average of 40 and 100, which allow the three timeframes to work in numeric harmony to produce the numeric symmetry found throughout the bible. The usage of the 100-year generation predominates in the bible prior to the time of Moses when men lived longer, but 40 years after Moses.

A generation of 70 years is also inferred in the book of Enoch and Jubilees, and is highly compatible with the jubilee system of the bible itself, (Daniel 9).

Below is a snippet from the Bible-Names Code, (Meaning of Names Code).

Note the centrality of Levi (from whence comes the priesthood). Levi is the middle name of the seven generations to Moses, like the centre of a seven-branched menorah! 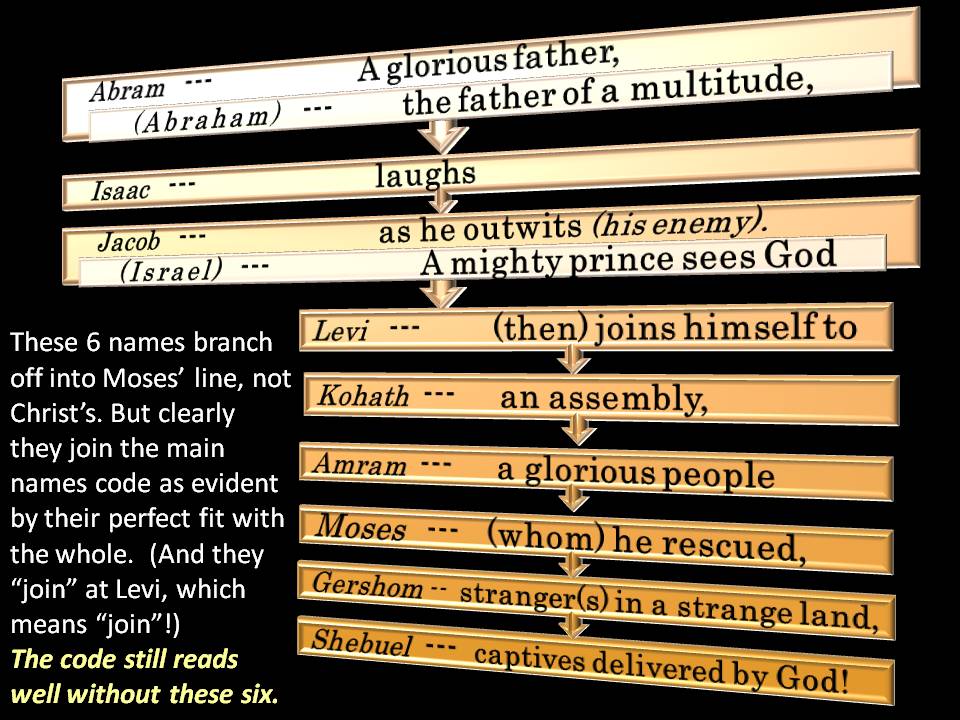 (1) I "happened" upon several new codes yesterday and today (Oct. 20-21, 1997). All have important bearing on these things. Today I looked up the name of "Elijah" and "Moses" as joined together as one at the shared Hebrew letter "E " ("O Z E J M A "). The first instance of it I found is the most important for our purposes and has direct bearing on the issue of, "what is a generation." However, another bible code discovered yesterday (using the word "witnesses") is far more important.

However, the bible code I would draw your attention to now is the "Moses", "Elijah" (O Z E J M A) code found in the Flood narrative. It begins with Genesis 8:6, "mountain," (the very last letter of the verse), unto verse 9, "her," (as in reference to the dove at the end of the verse). It occurs at 38 letter skips for a total of 190 letters. In the Septuagint version of Ezekiel 4, Ezekiel is told to lie on his side 150 days plus 40, for a total of 190. What I would draw your attention to in relationship to the "scrolling" effect I have just described, is that upon checking a commentary just now to do with this passage (Genesis 8:6-9), I happened upon this footnote in the Expositor's Bible Commentary Vol. 2, pg. 90. (The author here is quoting someone else):

"Most recently J.W. Wenham … has shown how the structure of the Flood story centers the reader's attention on the, "But God remembered Noah" of 8:1. Particularly important is the way that the structural patterns noted by Wenham help explain the author's careful attention to the times of each event. Wenham points to the following pattern of "mirror-image" repetition in the use of numbers.

The author goes on to say, "The period of "40 days" is also significant later in the Torah as the time of waiting and watching in the "40 days" of the spying out the land and the corresponding "40 years" of waiting in the wilderness (Num. 14:33-35). In the Numbers passage, the "40 years" are specifically said to correspond to the "40 days." This author then goes on to show a series of pattern relationships of the flood to that of Abraham. He says, "both … represent new beginnings…" (pg. 91).

Mr. Wenham's term, "mirror-image" is basically the same term I use to describe the "BC", "AD" mirror of Christ's birth. His birth is the ultimate new beginning. This is perhaps the most important key to understanding the numbers.

{By the way, I have no doubt in my mind that the scholars are correct in saying that the Hebrew manuscripts of 390 days plus 40, do indeed represent the original manuscript in Ezekiel 4. However, let me say it now, that I believe that wherever there is serious doubt as to an alternative line of manuscripts (for attempting to ascertain the original), both are to be accepted though not with equal weight. Therefore, the 430 years total of Ezekiel is by far preferred in the study of the numbers. Nevertheless, 190 has importance too, not just because of the Ezekiel passage, but because the Jewish calendar of years is based upon a 28-year solar and 19-year lunar basis. Hence, 190 are 10 lunar cycles. This is an amazing study in itself. For example, the exact middle of the 200th lunar cycle was the death of Messiah in 30 AD. The end of the 300th was the start of World War 2 (1939) wherein 6 million Jews regrettably lost their lives.}

(2) That the standard round number for a generation is 40 years is well attested. The "forty-year" period occurs about a dozen times in the Bible. It is the reason why some scholars do not accept the 480 years between the Exodus and Solomon's temple as found in 1Kings 6:1 to be a literal span of time. They see it as a schematic way of referring to a conventional 12 generations. I mention this to show the common consent to the idea of a generation as 40 years. Many of the lengths of rule of the Judges, along with the first three kings of Israel (including Solomon), reigned 40 years. However, as with Moses length of years, I believe they are all literal.