The Gospel of Judas

Brutus the Crocodile!
(Hurricane Monica and 666)

I believe that the so-called missing-link fish fossil discovery and the so-called Gospel of Judas discovery both currently in the news are a related sign of something ominous. I discuss it here in this link below on the forum. While it is not a polished document, nevertheless I thought some of you might be interested. Be sure to scroll down to read all its connecting posts.

I have also been doing some updating on the Bible-Codes website that I hope to put out in the coming weeks.

His coming draws nigh! 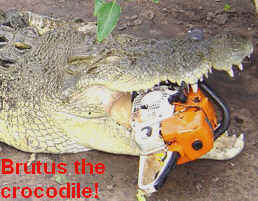 Updated with Brutus the Crocodile!

Article posted on forum has been reproduced below.

I believe that the release of this ancient false gospel text ("The Gospel of Judas") into the world at this time is a sign from God. It is like the resurrection of the "son of perdition" himself! "The son of perdition" is the same name given (only) to both Judas and the Antichrist. We have here a sign that the "man of sin" ---the antichrist --- "the son of perdition" --- is near at hand soon to be revealed, and with it the repeat betrayal of the ages.


Rev 17:8 "The beast that thou sawest was, and is not; and shall ascend out of the bottomless pit, and go into perdition: and they that dwell on the earth shall wonder, whose names were not written in the book of life from the foundation of the world, when they behold the beast that was, and is not, and yet is."

2Thess 2:3 "Let no man deceive you by any means: for that day shall not come, except there come a falling away first, and that man of sin be revealed, the son of perdition;
2Th 2:4 Who opposeth and exalteth himself above all that is called God, or that is worshipped; so that he as God sitteth in the temple of God, shewing himself that he is God."

John 17:12 "While I was with them in the world, I kept them in thy name: those that thou gavest me I have kept, and none of them is lost, but the son of perdition; that the scripture might be fulfilled."

Consider also the other strong delusion being poured out at the same time as the finding of this ancient Gnostic book. --- Consider the so-called finding of the ancient "missing link" of the half-fish half-crocodile! (This is in reality just another extinct creature created by God. The delusion is great since this finding is being used to supposed prove that creationists are wrong! It is of no small importance.)

Hmm! Half fish and half dragon (crocodile) resurrected from the past ---from the deep near the "North" pole! --- Does that not ring with parabolic meaning? (Note: Some trace the dragon theme found in the bible back ultimately to the Nile crocodile, Ezek. 29:3-5; 32:2-8.)

I have taken the liberty to add the following to the above post (today is April 28, 2006) as it directly relates: The tropical cyclone Monica that was forecast to strike Darwin was one of the most powerful ever recorded in the whole world! Cat 5 Monica had gusts to 350 km an hour a little before it made landfall.)

Updated with Brutus the Crocodile!

Article posted on forum has been reproduced below

"Brutus" the crocodile, (which means, "A stupid crocodile!") (Recall "Bel Qoph" Bible Code in the Balance Bible Code, which begins by reading, "Bel is a stupid Ape!" Bel and the dragon as often in association, --- thus we have "Bel (Baal) is a stupid ape," thus mocking the Darwinian half ape-man notion, and now the "stupid crocodile!" Both are linked to the storm as well. See "Bel Qoph!") Note that the above two images are in the article about Bel Qoph put on the net half-year ago during Hurricane Qoph (Delta in Atbash). So God had Darwin in mind when he gave this bible code as a sign back then.)

See the crocodile story that made headlines as they cleaned up from cyclone Monica! I understand this as a God-given analogy. The tree meant to be cut at the top represents the evolutionary tree in which it is claimed that man is the top of the tree and that we are descended from the fish/crocodile lower down the evolutionary tree. In the garden of Eden, the dragon (crocodile) (that is Satan) reached to the top of this tree and caused man to fall. However, the lie is that such a tree even exists, for in reality God made man, and man is not the result of brute evolution as claimed by Charles Darwin, after whom the spared city of Darwin was named.

In a bizarre incident near Darwin yesterday, a 4.4m saltwater crocodile named Brutus stood on its tail, reached up a tree and snatched a chainsaw from a handyman...

"It was unbelievable," said the relieved chainsaw operator, mining worker Fred Buckland. "It all happened so quickly."

The drama unfolded at about 9am at Corroboree Park Tavern, 80km southeast of Darwin, where several trees had blown over as a result of wind from Cyclone Monica, which passed through the area early in the week. One had fallen against a crocodile enclosure, where tourists come to see the 800kg beast known as Brutus.

So Mr Buckland, 47, went up the tree to cut the top off with a chainsaw. Before long, the croc was reaching almost 5m up the tree.

"He was moving at a hundred mile an hour," Mr Buckland said. "I wouldn't have thought something so big could move so quick. I sacrificed my chainsaw. It was either that or me, so he got the chainsaw."

God spared the city of Darwin because He delights in mercy and because no doubt people were praying. However, God warns that Darwinian theory will one day bite fallen man (like a crocodile), that is, it will bring due punishment like a great storm upon the inhabitants of the earth for replacing the honor of the Creator and giving it to the dragon/crocodile, who claims to be the storm-god. And the punishment will be severe --- like the bite of a chainsaw --- for the haughtiness of man will be cut down, and the top of the evolution-tree with it!

Another image to do with Bel Qoph posted half-a-year ago was that of the snake/dragon reaching up to the very top of the tree and being cast down from there. The dragon and the crocodile, as said, are one and the same. In Egypt, the dragon Typhon --- from which comes the word "Typhoon"! --- is represented by a crocodile. See Ezek. 29:3-5; 32:2-8.)

It is about as difficult a sign to understand as Rev. 12. Darwinian evolution makes the ape and the dragon (crocodile) and ultimately a literal rock our creator in their so-called tree of life. God is mocking this in keeping with the past signs on this subject as discussed in other posts and on the website.

The passage of Rev 12 also contains cryptic imagery which can only be understood if the imagery is understood. In the same way, each thing in this simple story about that great crocodile likewise suggests an allegory. The tree, the location near "Darwin", the great storm, the top branch to be cut, the fall of the man from the top, the great dragon (crocodile), the 666 days, the crocodile on its tail reaching to the top of the (evolutionary) tree, the name of the crocodile (meaning "stupid"), the cutting tool in the jaws of the dragon suggesting its anger and intent --- all these are symbolic and take their meaning from things previously discussed so that there is no doubt as to their meaning. I could not imagine a better analogy to represent the fall of man and the struggle of the dragon for dominion over man and over all creation, and over God Himself.

Is this not the basic meaning of Revelation 12?