Updates on the Ongoing Fulfillment
of the Mene-Tekel Bible Code

(These updates are meant to be read
after reading the mene-tekel bible code.)

{Am I saying that Saddam Hussein
is the Antichrist? (No!)}

Saddam hangs on day predicted by Bible Code
(Massive bible code put on net nearly 7 years ago,
detailing both how and when)

The San Francisco blackout occurred 9 p.m. and 3 a.m. EST, 6 p.m. and midnight local time, (Dec. 20, 2003). One-third the city was blacked out, caused by a fire. (Ironically, Hanukkah is also called "the festival of lights," which lasts 1 + 7 days.) The blackout repeated itself again 6 hours later. The power came on the next morning. On the morning after that, an earthquake occurred between Los Angeles and San Francisco. It was the worst quake since 1999. A couple of days after that (Dec. 24, 25), an apparent would-be terrorist attack by a dozen plane-hijackers was narrowly obverted. It looks like they planned to fly the plane into some building in Los Angeles, or somewhere in route to Los Angeles (San Francisco?) (Note: Very soon after this blackout, San Francisco became the spearhead for the push to legalize sodomite marriages. The blackout, therefore, was a sign of this moral plunge into darkness.)

What does it mean?

There have been a series of blackouts lately, all 1150, 1290 or 1335 from the two starting dates to do with the mene-tekel code. (1150, 1290 and 1335 are the time frames mentioned in Daniel 5 and 12. The bible code itself explains the symbolism of the darkened Lamp.) Major cities that are emblematic of certain aspects of "Mystery Babylon" (Revelation 13) have been successively blacked out. The first was literal Babylon, it was blacked out during the Iraq war. (Iraq is ancient Babylon.) Then New York as economic Babylon. Then 45 days later, Rome was blacked out. Rome is spiritual Babylon. Now, San Francisco, as moral Babylon is blacked out. She is Sodom. Prophetically, both Sodom and Babylon burn with fire and brimstone. San Francisco is the seat of Sodomy in America and perhaps the world, with Los Angeles not far behind. By these blackouts the Lord is warning that unless these cities repent, they will be handed over to the darkening of the mind, which precedes catastrophe. Moreover, these 4 cities symbolize all the cities of the world in one way or another. Ultimately, "Babylon" is an epithet for society in general---society in rebellion against the kingdom of God. Perhaps Jerusalem will be darkened next?

Christians should be aware of God's warnings and not be sleeping as the world is, but be wide awake, sober and alert.

The New York blackout and the San Francisco blackout are 129 days apart (i.e., the 129th day), with each blackout as 1290 days from when the mene-code first began to be revealed to me (less 3½ days, as explained elsewhere), and again 1290 from when the related hand-code was first revealed to me. The arrangement of the numbers are striking and consistent. The same can be shown with other events prophesied by the code, fulfilled 1260 days later (separated by 126 days), and 1335 days later (separated by 133.5 days)! In all, about 10 events in fulfillment of the code have come to pass all aligned by these biblical numbers so as to make it clear that they are not by chance but part of a synchronized prophetic fulfillment.

{Am I saying that Saddam Hussein
is the Antichrist? (No!)}

The following is quoted from Wikipedia concerning Saddam who called himself, "The son of Nebuchadnezzar", the same title given to Belshazzar by Daniel at the fall of Babylon and the, "writing on the wall", (Daniel 5:18).

(of Babylon) on top of the old ruins... He inscribed his name on many of the bricks in imitation of Nebuchadnezzar. One frequent inscription reads: "This was built by Saddam Hussein, son of Nebuchadnezzar, to glorify Iraq"... These bricks became sought after as collectors' items after the downfall of Hussein, and the ruins are no longer being restored to their original state. He also installed a huge portrait of himself and Nebuchadnezzar at the entrance to the ruins..." 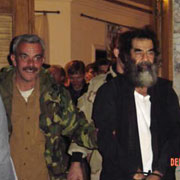 The capture of Saddam 7 days before our move to Edgar and the San Francisco blackout is the most important of all these signs, and an important fulfillment of the bible code. The bible code has a great deal to say about it---amounting to several paragraphs. 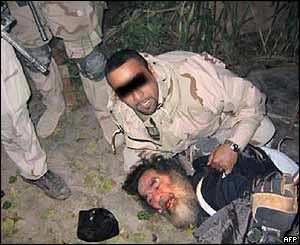 Time magazine, in their opening paragraph about Saddam's capture, vividly pointed out the similarity between the pit where he was hiding and that of a grave. Not only was the place where he was hiding much like a tomb, but even the things that were 'buried' with him there---riches and rifles---were the sort of things that ancient kings were buried with, (see Ezekiel 32:27 for an example).

Essentially, Saddam's ascension from the pit symbolized the resurrection of the beast from the pit (Revelation 17:8) in contrast to Jesus the gentle Lamb of God, (Revelation 5:5). The capture occurred 133.5 days after his sons were buried, (see Revelation 11:7; cf., Daniel 12:12). They found him in this dark grave-like pit 1335 days after Nisan 13, 2000. (Nisan 13 is the anniversary of when Judas betrayed Jesus for 30 shekels of silver---just as prophesied in the code, but again fulfilled by Saddam and sons. It is also the anniversary of when Haman cast the pur to kill Mordecai and all Jews.) 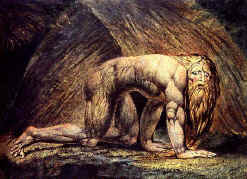 This day of his capture was also 1290 days from the anniversary of when Jesus gloriously ascended up into heaven. Contrariwise, when Saddam ascended up from his dark pit, (and there was even a blackout there at the time), Saddam appeared crazed just like ancient king Nebachadnezzar did when he went mad seven years, (Daniel 4 and 5).

Also notice that the prophecy of the 1290 and 1335 days of Daniel 12 occurs at "the bank of the (Tigris) river", which is also where Saddam's hole was located! Opposite the Tigris river was his palace (in contrast to his shack), and Daniel 12:5 reads: "...one stood on this side of the (Tigris) river and the other on the opposite side..." (Daniel 12:5). In the same way, on this side and that of the expanse of heaven resided Jesus' glorious throne in contrast to His lowly manger and tomb. The comparison is particularly compelling when we note that Saddam arose from his pit 1290 days after the anniversary of when Jesus ascended up into the heavens returning back to His throne! (See Daniel 12:11-12.) Clearly, Saddam is a type of Antichrist, who mirrors the true Christ. 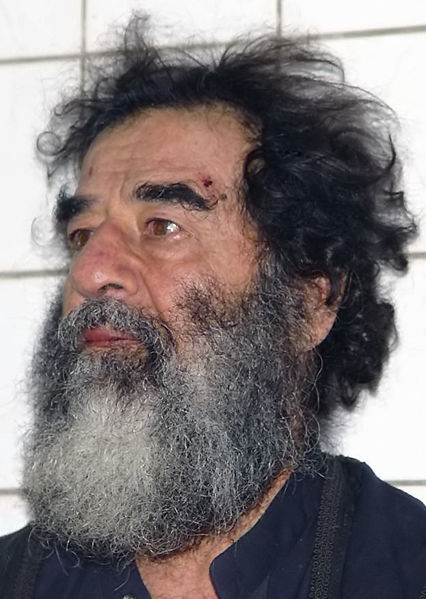 Also, like the rotting garbage that was scattered about the place where he was hiding out, so the code sarcastically portrays Saddam as 'rot vomited up by the grave'. The code is drawing a satirical contrast between Jesus as "Manna" (the bread of heaven) at the Lord's supper with that of Judas Iscariot (and Saddam) as a mere 'crumb of rot' at the graves mouth! (The bible says that Satan entered Judas when he partook of the Lord's supper that Passover night, and that he then went straightway to complete his act of betrayal. Even the amount of the betrayal is encoded!) Moreover, it happens that there were two strange pictures hanging on the wall of the shack where Saddam was hiding.

"Strange," that is, for a Muslim! There was a picture of Mary, the mother of Jesus, (i.e., the bread of heaven), and a picture of Jesus at the Last Supper!

The bible code declares that Saddam will be executed---apparently by hanging---just as Haman and Judas Iscariot were. (This is my own interpretation; however, the code is quite plain when it says: "He will execute him.")

The timing of the 1290 days (i.e., half-seven years) from when the hand appeared, (less the 7 days till Edgar, etc.) is suggestive of the 7 years of Nebachadnezzar's madness, (about whom Saddam compared himself, cf., Daniel 4), and it also speaks of the 7 years that follow Armageddon according to the Ezekiel 38 passage. Though I cannot detail this now, this 7 days (1290 days + 7 days) clearly represents the 7 years before (and again after) the millennium, as mentioned in the book of Revelation. The numeric was prophesied in the code and explained several months beforehand in my interpretation of the code. Even the day of the week---the Sabbath (Saturday) was mentioned, though at the time I did not expect such a literal fulfillment. I thought rather that Saddam's sons might possibly be dug up from their grave by their enemies or something like that, rather than their father, Saddam, figuratively dug up from his! Even Time magazine in their opening paragraph about Saddam's capture vividly pointed out the similarity between the pit where he was hiding and that of a grave. Not only was the place where he was hidden much like a tomb, but that the things that were 'buried' with him there---wealth and two rifles---were the sort of things that ancient kings were buried with, (see Ezekiel 32:27 for an example).

(Rev 17:8) "The beast that thou sawest was, and is not; and is about to come up out of the abyss, and to go into perdition. And they that dwell on the earth shall wonder, they whose name hath not been written in the book of life from the foundation of the world, when they behold the beast, how that he was, and is not, and shall come."