Bible-Names Code:
From Adam to Jesus

See 1260d.com for most recent articles!

An awesome prophecy emerges when the meanings of all 72 names in the genealogy from Adam to Jesus are read sequentially!

The meaning of a name was very important in bible days. Sometimes the bible itself informs the reader what a name means. Famous biblical persons such as Adam, Cain, Seth, Noah, Abraham, Isaac, Jacob and his 12 sons, all have the meaning of their name explicitly given in the bible. Their names tell the story of why or how they were born.

Some have wondered whether these names (with their meanings) were intended by God to be strung together in succession to tell some larger story. Already there have been attempts to string together the first 10 names in the bible from Adam to Noah. In general, this is what the first 10 names of the bible read when the meaning of each name is rendered in the same order given in the bible.

"The God-man is appointed; a mortal man of sorrow is born!" "The Glory of God shall come down and teach that His death shall bring the grieving comfort and rest."

Read down the right-hand side of the column below where the meaning of each consecutive name in Jesus' genealogy is given. Note the unfolding prophecy! 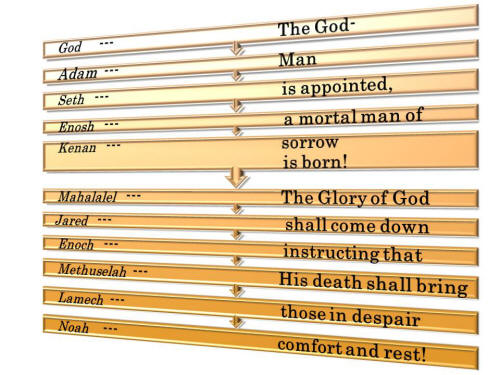 Both Evil and Hope Branch Out Like a Plant

(The "friend" of the downtrodden is angry) 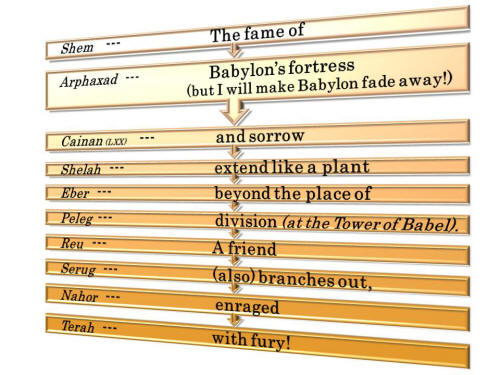 A Mighty Father and a Prince, Who Save a People 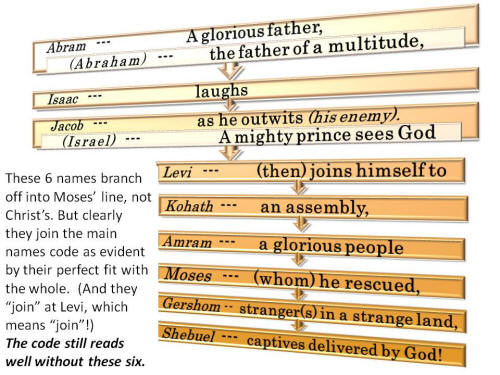 The Prince Described, and His Mission 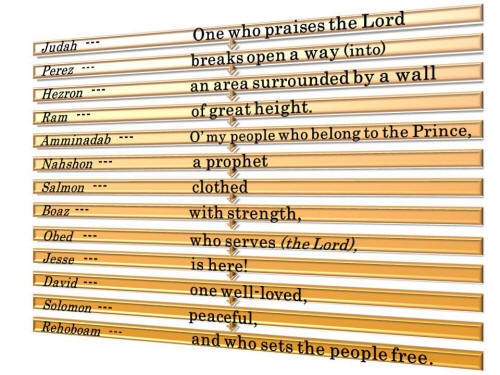 The Son Relies on His Father to Raise Him Up 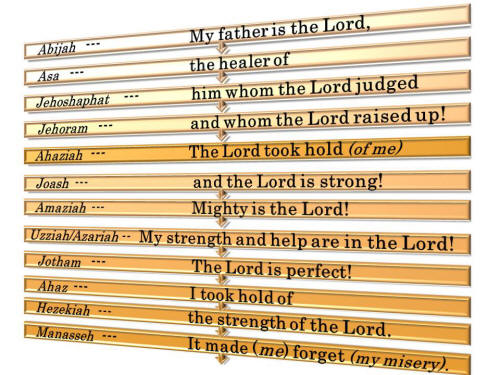 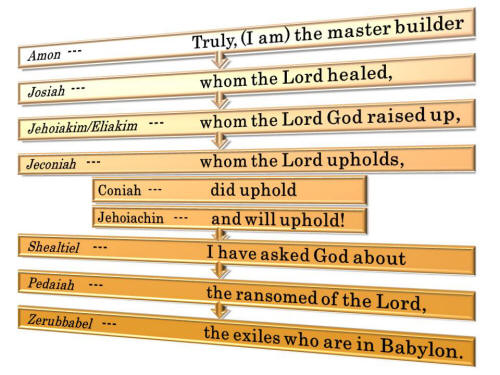 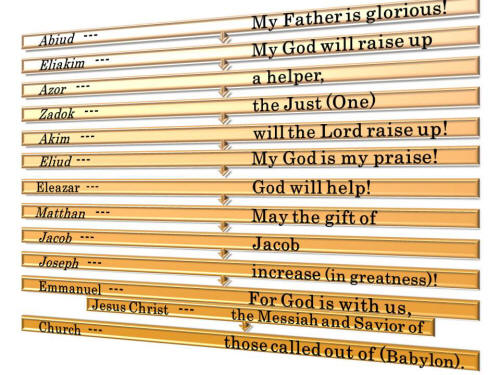 Click here for detailed notes on each name, as well as general notes about the number of names and methodology.

Another type of bible code has also been recently discovered. It occurs within the first 20 names from Adam to Abraham and confirms the names code. The first letter of each consecutive name from Adam to Moses in the original Hebrew forms an acrostic. It is clear by the what this acrostic-prophecy says that the reading is meant to be affixed to the Bible-Names Code.

The Promise of Forgiveness 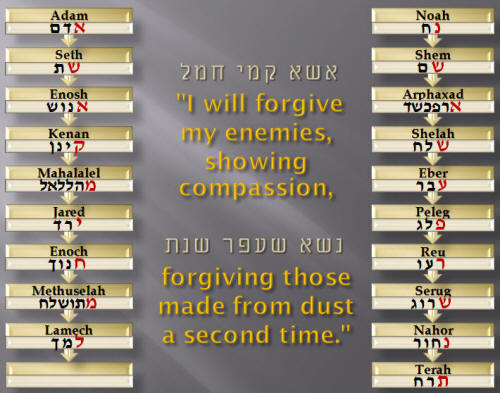 Putting it all together in plain English:
Meaning of Names from Adam to Christ Strung Together

The genealogy of Jesus portrays key biblical events as they unfolded through the ages, while at the same time foreshadowing Jesus Christ.

The Promise to Fallen Man

The God-Man is appointed; a man of sorrow is born!

The Glory of God shall come down from heaven and teach men that by means of His death He shall bring comfort and rest to those who mourn.

The fame of the stronghold of Babylon, and sorrow, extend their borders like a plant beyond the place of division (at the Tower of Babel).

The "Friend" of the Righteous is Angry at the Wicked

A friend also branches out, enraged with fury!

A Mighty Father and a Prince, Who Save a People

A glorious father, the father of a great multitude laughs as he outwits (his enemy). A righteous prince sees God!

A mighty-one fights! {He joins himself to an assembly, a glorious people whom he rescued, stranger(s) in a strange land, captives delivered by God!"}

The Prince Described, and His Mission

One who praises the Lord breaks open a way into a safe place that is surrounded by a high wall.

O' my people who belong to the prince, a prophet clothed with strength, who serves (the Lord), is here!

Out of love, this beloved one paid the price for peace in order to set the people free.

The Son Relies on His Father to Raise Him Up

My Father is the Lord, the healer of him whom the Lord judged and then raised up.

The Lord has taken hold of me and the Lord is strong! Mighty is the Lord! My strength and help are in the Lord! The Lord is perfect! I took hold of the strength of the Lord and it made me forget my misery.

The Son Identifies Himself as Co-Creator

The Son Prays and Praises His Father For Help

I asked God about the ransomed of the Lord --- those exiled in Babylon.

My Father is awesome! God will answer by raising up a helper, the Just One will the Lord raise up! God is my praise! God is the One who helps.

Concluding Blessing upon Messiah and His People

May the Gift of Jacob increase in greatness, for God is with us --- the Messiah and Savior of those called out (of Babylon).

"I will forgive my enemies, having compassion, forgiving those made from the dust once again."

Are you forgiven by God and ready for heaven?

Please pray for this Names Code, that souls would be saved!

Detailed Notes on Each Name

Other Formats of "Bible-Names Code"
Names Code as PDF {or, PDF with no images}
PowerPoint (If not working try older version: PowerPoint)
(Full Version, Or try older PowerPoint)

Note: In the above simplified rendering of the Bible-Names Code, the first paragraph is the line of Cain who perished in Noah's flood. Remarkably, the godly and ungodly up to Noah use similar or same names. This striking similarity is the logic behind inserting Cain's line alongside Seth's. However, for arguments sake, because Cain's line merely affirms what the godly line to Noah already reads, thus, Cain's line can be omitted with no loss to the code.

The righteous line of Adam to Noah is listed after Cain's line and continues through to Jesus and His "Church". The word "Church" is listed as the last name in the genealogy because in a theological sense His Church, which was "born" just 50 days after Jesus died, caps off the genealogy of Jesus. This is in agreement with Isaiah the prophet, "...he will see his offspring and prolong his days", (Isaiah 53:10 NIV).

(Click here for the method of decoding the Bible-Names Code.)

Copyright © 1997-2017. If reproduced, please provide hyperlink back to this page.